Having read the interview with Francis I appreciate that the “Gentleman of Sailing” takes a broader horizon in view for his profession as racing sailor. I appreciate it that he has developed during his 30 years of sailing career (since 1988) a consciousness for what sail racing sports needs in coming years to keep attractive to medias, sponsors and the masses of audience around the globe:

Francis’ awareness for the “right mix ” and balance in solo or team racing is encouraging.

TJV (27/12/2017). – For Francis Joyon, the 2017 season began with an amazing achievement, when he smashed the Jules Verne Trophy record on IDEC SPORT with a new time of 40 days, 23 hours, 30 minutes and 30 seconds. A skilled observer, who was for many years the fastest solo round the world sailor, Francis is also well placed to analyse the impressive record recently set by François Gabart. With a promising 2018 ahead, leading up to the legendary Route du Rhum, Joyon gives us his opinion about the use of foils in the next Route du Rhum-Destination Guadeloupe…

On 27th January 2017, with your crew you improved the Jules Verne Trophy record time. Looking back today, how do you feel about that achievement?
“I’m delighted with it. I’m proud that our little boat and short-handed crew managed to smash the record. It is an even bigger satisfaction after several unsuccessful attempts. This crewed record was very different from what I experienced as a solo sailor, so is a bit like a new career. I have some fantastic memories of this experience. Our crew wasn’t made up of mercenaries for hire, but skilled lads, who each had their own successful projects in the past and knew what it was all about. The total commitment in terms of effort and approach meant that we all did our utmost to get this result.”

What do you think about the new record set by François Gabart, who now holds the solo round the world title?
“It’s a bit tough for us seeing François with his more modern boat get really close to the outright crewed record (laughs). If we hadn’t won the title early this year on IDEC SPORT, François would have set the best time ever, including the crewed record. That is exceptional, especially for a first attempt. I really thought that François would smash Thomas Coville’s record, but not get so far ahead. This year, I raced against François in The Bridge (between Saint-Nazaire and New York) and I was able to see the real potential of his trimaran, which looks incredible. For his round the world record, François adopted an intelligence approach, without piling on the pressure and he sailed perfectly. There are now four of us who have sailed around the world solo on a multihull – me, Ellen MacArthur, Thomas Coville and François Gabart.”

For a long time and on two separate occasions, you held the record (in 2004-2005 then from 2008 to 2016, with a time of 57 days and 13 hours). How do you feel about the fact that records now regularly change hands?
“That is logical. There has been a lot of progress with the boats. Between my former IDEC trimaran and Thomas Coville’s Sodebo Ultim, the speed difference was around 20 %. Thomas’s achievement last year did not surprise me. With François Gabart’s Macif, the potential is even higher and the record was improved. Soon, we’ll see flying boats tackling the records. The level of performance will continue to grow. Our knowledge of the weather has improved too and the quality of the sailors is very high. Everything leads me to believe that the records will be smashed in the coming years.”

A thought for Yves Le Blévec, who just capsized off Cape Horn during his voyage around the world against the prevailing winds and currents…
“Yves is our neighbour on the pontoon in la Trinité-sur-Mer. He too has shown he is totally committed and ready to take certain risks. He had a good start even if it ended up with this huge disappointment. I have been through failures, capsizes, dismastings. I know full well that by overcoming these difficulties, you get to experience better things later. Yves knows how to get back on his feet.”

Let’s look ahead to the 2018 season. The first big date is the Nice UltiMed. What are you aiming to achieve in this event?
“The main goal is to take advantage of the delivery trip and the race course in the Mediterranean to check all the changes made in the yard this winter. We have done a lot of work on the rudders and their foils and on modifying the foils, which should improve the boat’s performance. We are also changing the mast track and mainsail cars and fitting better autopilots for the solo Route du Rhum. Another little detail… we’ll be reinstalling Franck Cammas’s famous bicycle on this boat, which was in place when she was called Groupama 3.”

How do you feel about the Route du Rhum, the big event of the 2018 season?
“I want to set sail with a fast boat, which is light and reliable. It’s going to be an impressive line-up with the new flying boats. I’m fascinated by the opportunity of racing against them. It’s not going to be easy, but I hope to cope thanks to my weather options and perhaps because my boat is more reliable than the others. When sailing solo, the differences in potential tend to be reduced between the boats.”

There is the question about whether the Rhum should allow foils to be adjusted by motor. What is your attitude about that?
“Some teams have asked to use an adjustment system for the foils, to allow them to be set automatically. I am against that to ensure everyone is on equal footing and I have written to the French Sailing Federation to give them my opinion. Allowing foils to be adjusted with less than a year to go to the Route du Rhum would be profoundly unfair. We need to respect the boats that already exist, not give a special advantage to certain teams in comparison to others, who have not had the time to develop this technology. I’m not against the change being made in the future to adopt this principle, but it requires a lot of thought and the energy required must not be supplied by the diesel engines, which will have to be running all the time. We need to favour renewable energy sources: wind turbines, solar panels, hydrogenerators. Our strength is we use sails to propel us. One day there won’t be any more oil, so we should start to look ahead to that. Continuing to use heat engines means we’re not moving in the way the world is going. So let’s set an example to others.” 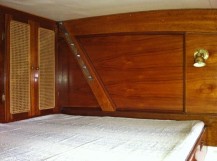 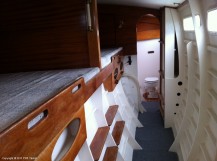 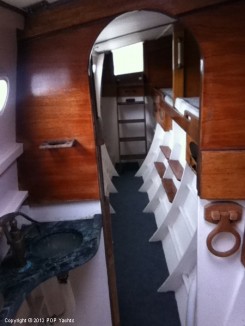 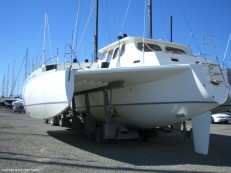